TV shows be darned…they still have a hold on me even after all these years of Netflix options, Hulu binge-watching, and Apple TV-palooza. Bottom line? Hollywood still has my number.

Case in point: last nights’ episode of This Is Us – the complex, character-driven, 1-hour drama that has taken my Tuesday night by storm in the last semester.

I promise not to give away any plot points in case you’re a few eps behind but there is a conversation from the show’s dialogue that I am burning to process with you all. Here’s the scenario:

Jack and Rebecca are having a terrible argument (as couples do) wherein Rebecca is pointing out that Jack needs to fix a problem (in this case drinking) and Jack throws in a dig about her not being around much (because she has the nerve to have been working on expanding her singing career) and yada yada yada – bing bang boom – major fight ensues. They’re yelling over each other in a desperate attempt to be heard. All the while, neither one hears the other. This is hard to watch. But the climax of the argument comes when she says these words:

“I am a housewife, to three children who do not need me anymore

This moment shattered me!

There is just something about this super precise, raw, real, PAINFUL moment where I am transported into their living room. The reality that this is a TV show with actors, a set, script supervisors and a key grip (whatever that is) is suspended and I’m right there with Rebecca processing my feelings of being a ghost, too.

(Did they have a focus group for middle-aged moms of teenagers? Because: nailed it!)

Back to the shattered feeling. Shattered me for 3 reasons:

1 – I have felt this way before

One of our central questions as humans will always have to do with our contribution to the world and meaning in our work. And as our kids grow and develop into independent beings, our purpose gradually wanes. I’m not feeling like my life is simple and boring – I still have plenty on my plate. But I do feel myself gasp a little bit inside at the thought that I won’t always be parenting my children. I want them to leave someday but I’ve certainly gotten used to being needed to keep them clean, fed and reasonably appropriate for the last 17+ years. To imagine that one day my days won’t contain those things is quite astonishing to me.

2 – I want her to take back what she said about being a ghost.

I wish I saw another side to her character on the show – the one with a few friends to linger over a glass of wine with. I think having friendships apart from my husband has made all the difference in our marriage. Because of them, I am less likely – although not entirely – to unload my thoughts of being overlooked, undervalued, and being ghost-like in a conversation that wouldn’t likely start fair or end fair.

Let’s take a break from the serious talk for some literally perfect tweets about the show: 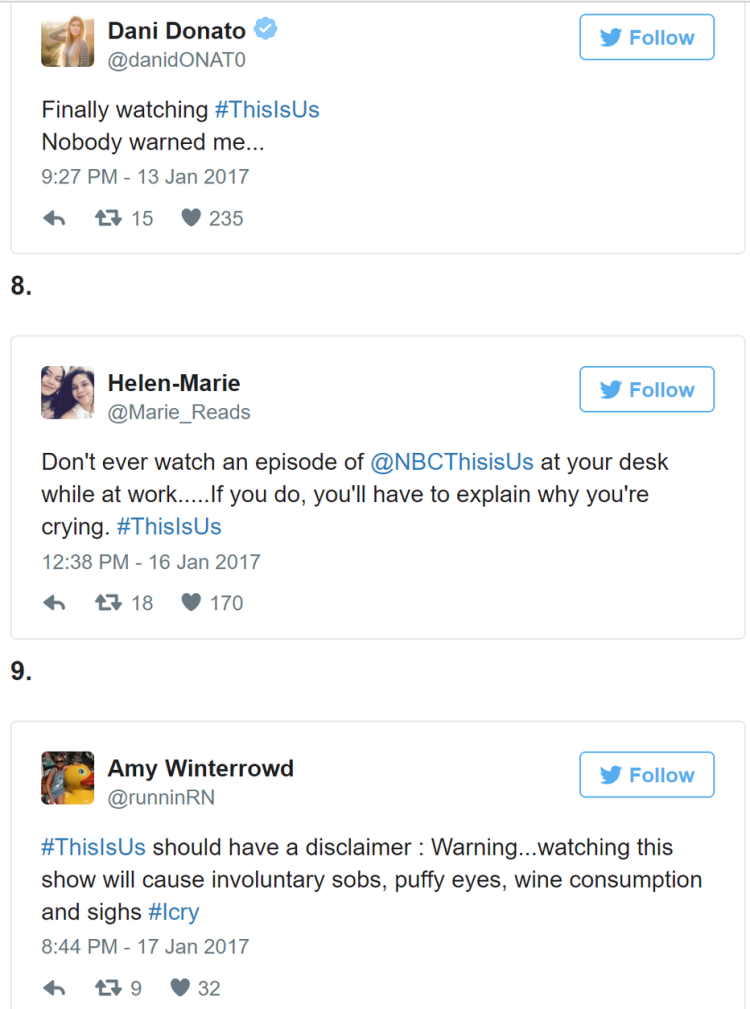 3 – This is not Jack’s or her kids’ responsibility (although they may be part of the cause.)

Rebecca! I want you to figure some of this out before it gets to the shout-it-out-in-the-living-room-as-an-ultimatum stage. Do women sometimes feel like ghosts who do lots of things for their families without much appreciation? Yes! Is it also possible for those SAME women to figure out that it’s not about who notices or who thanks you? and let’s be honest – even if you got all of those accolades you’d still have baggage when it comes to significance and purpose…am-I-right?

SO NOW WHAT? What do we do when we find ourselves at a crossroads – just as Rebecca has? Deeper meaning in life and an identity outside of her family are issues that I share with Rebecca. I bet you do, too. And you don’t have the perfect theme song playing behind your philosophical meltdown like Rebecca does, sister.

Promise me that you will identify those “ghost places” in your heart…and dismiss them one by one. YOU are not a ghost. You are right where you need to be. Unique. Beautiful. You. I’m so grateful for YOU.

Sounds like a powerful moment in that show. I’m surprised to hear you say that you can identify with that character, probably because I romanticize the relationship you have with your kids to a degree.  However, I do remember the first time that Jack wanted to hang out with friends after a band concert, rather than carrying on the tradition of getting ice cream with the family. I don’t want that moment to come.  I think I’ll make my kids go to ice cream with me, thus wrecking any shot of having the sort of relationship you have with your kids. Right now, I am still in the phase, where I have to answer countless questions like these from today: “Why can’t dogs eat chocolate?”  “No, what exactly happens in their body, when they do?” “How much chocolate would they have to eat to throw up?”  “What about to die?”  For some reason, they still think I know the answers to all these sorts of very specific questions. I don’t feel like a ghost.  I still am on edge when I go to another room because they will be looking for me, within a couple minutes. But I would actually rather be in this place than any ghost place, to be honest.

First of all, you had me at “This is Us.” I LOVE this show! In fact, there are probably a dozen blog posts we could craft right now inspired by the characters and family dynamics of that show. People, if you are not watching this series, get out from under that rock, repent immediately and carve space in your week to check it out. Diatribe over. Back to Jack and Rebecca…

I think most women, at some point in the journey of motherhood, can relate (perhaps all too well) with Rebecca’s plight. She has a dream to become a singer. The painful memory of rejection and not “being good enough” for the industry haunts her through the years. She sacrifices everything to be (her version of) an awesome wife and mother and finally (in her mind) receives a long-awaited gift — a relatively major lead-singing gig with her band. She’s elated! And who can blame her? Finally, something “for herself” (her words). Oh man, can I relate. The tension between the giving of myself to motherhood vs. taking care of myself and pursuing “my dreams” spins right round baby through my head — All. The. Time. (Just ask my hubby. Love you, babe.)

Honestly, I never thought about the fact that Rebecca is never hanging out with any friends. Jack has Miguel. (Which leads to so many unanswered questions like, how in the heck do Rebecca and Miguel end up together? But that’s for another time.) I don’t know what I would do or where I would be without my girls!!! Seriously. And counseling?! Three cheers for good counseling. I do hope Rebecca (and Jack for that matter) finds some hope in doing the hard work of coming to terms with the beauty and pain that is marriage and parenthood. Maybe I need to send Rebecca a copy of my book just so she can read the chapter titled, “Motherhood, is Not Your Greatest Calling…” I’m still working through that one. Anyone have her address??